Home-Barista.com Your guide to exceptional coffee 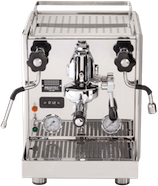 The E61 group may have been invented in the early 60s, but double boiler espresso machines based upon this design for home use are relatively recent. The popularity of the E61 / double boiler combination has really taken off the last few years with the introduction of models from several manufacturers including Expobar, Quickmill, Vibiemme, and Izzo. Because they're so popular and share many of the same characteristics, potential buyers are challenged to sort through the differentiating factors. For this reason, we're reviewing several E61 / double boiler models and summarizing their strengths and/or weaknesses in ergonomics, construction, and features.

The evaluation model of this review, the Profitec Pro 700, is a relative newcomer. Profitec GmbH was founded in 1985 to complement the sister company ECM. They both are located in Germany, but according to their company representative, Profitec is focused on dual boiler espresso machines for the home consumer.

The popularity of the E61 group is astounding. This review is the 12th review of espresso machines based on this group. Egads! Despite this plethora of coverage (or maybe because of it?), shoppers are surely confounded by the sheer number of similar choices. This also makes the buyer's task of choosing just one all the more difficult!

Where to Buy:
Whole Latte Love
Clive Coffee
Back to the topic at hand, namely the Profitec Pro 700. Although it has a familiar shape, its superior attention to finishwork is plainly evident. The photos don't capture it well, but the stainless steel is "brighter" than some E61 espresso machines, presumably thanks to better polishing. For those who admire the look of super-shiny stainless steel, based on informal side-by-side comparisons, the Pro 700's is nearly as brightly polished as the equipment from two renowned manufacturers, Olympia Express and Elektra. Unfortunately, the bottom of the espresso machine isn't stainless steel, it's painted steel, which may rust in the driptray area if the paint is scratched away. Owners should consider placing a strip of black electrical tape along the painted edge of the driptray support to avoid this potential problem.

The Pro 700's has several unique design features: Instead of silicone tubes dangling over the side of the reservoir, the Pro 700 has a male fitting on the bottom of the reservoir that mates with the espresso machine's female coupling. That is, the reservoir "snaps" into place without any silicone tubing. This makes for a neater appearance and eliminates the need for clearance above the tank, i.e., the top of the tank is flush with the cup tray that covers it. Another unique feature of the Pro 700 is its unusually high clearance between the driptray and grouphead -- even enough for 10 ounce travel mugs. If you're pulling espressos into a demitasse, the Pro 700 includes a "booster" tray that rests on the driptray so the falling stream doesn't spatter.

Finally, the Pro 700 features the ability to switch from pourover (reservoir) to directly plumbed with the turn of a lever and the flick of a switch. This feature will come in handy if you can't locate it where direct plumbing is available, but you want to plan for the possibility in the future (caveat emptor: once you've gotten used to the convenience of direct plumbing, you won't be able to go back!). Note the driptray isn't designed to be hooked to a drain and its rather shallow, so you'll have to empty it every few days.

Although it was not among the E61 patent claims, the Pro 700 demonstrates impressive temperature reproducibility, thanks to its PID temperature controller and well tuned thermosyphon. Like other E61 models reviewed on this site, it idles a little on the cool side, hence a short 2 ounce flush and a 30 second wait is recommended if the machine has been idle for more than 10 minutes. For a typical home barista espresso preparation pace, the temperature is within ~1°F after a short warm-up flush. Impressive for a group design originating in the 1960s!

The Pro 700's smooth, easy consistency shows through whether you're preparing drinks just for yourself or for a group. For example, I took the Profitec to a small "cars and coffee" event at a local dealership. I didn't keep track of the cup count, but I'd say it was around 20 drinks/hour. The longest backlog I had was six cups with prep time of 45 seconds per drink. The Pro 700 is comfortable with that pace; the main gating factor is the steam time, which is around 30 seconds for the small cappuccinos I serve (approximately 5 ounces of milk). In terms of espresso, the E61's high forgiveness factor and well-tuned temperature control meant one consistently good drink after another.

When it comes time to steam milk, the Pro 700 shines in terms of usability. The no-burn steam wand is easy to maneuver and the retro looking knobs are quick to close. There's no need to crank them tight, a mere half-turn goes from closed to open (i.e., turning the knob compresses a spring against the valve's seat, so there's no need to close it all the way to the hard stop of the valve's travel).

With a steam boiler pressure of 1.2 bar, it took 1 minute to steam 8 ounces of milk for a large latte. For cappuccinos, a volume of 4 to 6 ounces is common; the time was 30 and 45 seconds respectively. The stock tip has two small holes to slow the pace for beginners, allowing them ample time to focus on properly injecting the right mix of air/heat from the steam wand. Those who regularly prepare standard cappuccinos (4-6 ounces of milk) will be satisfied with the stock tip and the steam boiler set to 1.2 bar. An optional 4 hole tip is much closer to the expectations of an experienced barista, nearly cutting steam time in half over the stock tip and dramatically improving the rolling action. If you're steaming small amounts of milk (say 4 ounces), the stock tip is perfectly fine. But if you steam 6-8 ounces, the optional 4 hole tip is a must-have.

The site's new evaluation process for the semi-commercial and commercial class espresso machines includes serving a larger-than-usual group of people. The Pro 700 is comfortable with a pace of 30 drinks/hour pace; the main gating factor is the steam time, which is around 30 seconds for the small cappuccinos (approximately 5 ounces of milk) and around 60 seconds for lattes (approximately 8 ounces of milk). A top-end commercial espresso machine like the La Marzocco GS/3 would cut that time by more than half.